Acute torticollis
Acute torticollis is commonly referred to as “wry neck.” It frequently presents as pain on waking and feeling like your neck is locked. We have actually previously blogged on this but will go into a little bit more detail here.

So what is it?

Let’s start with a bit of anatomy and how the neck should function normally. As previously discussed in the section on back pain, the spine is divided into 5 sections with the top 7 vertebrae being the cervical spine, or neck. As can be seen from the picture below facet joints or zygapophyseal joints if you’re looking for a really fancy name, run up and down each side. They are arranged at an angle in order to take weight i.e. the head, as well as enable movement by gliding up and down the slopes of the joint surface. 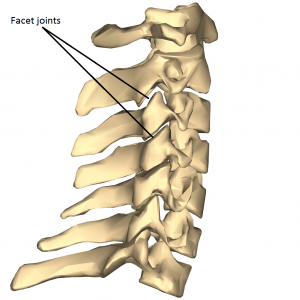 Around these joints are muscles whose main role it to move the joints. If these muscles go into spasm that alone can be painful but it can also severely restrict the movement in these facet joints which can lead to inflammation.

So what can we do about it?

The initial goal is to get rid of the pain and regain full range of movement. A great place to start is some simple neck rotations as shown in the video below. Note that you will probably be very restricted in this movement, so just go as far as you can to the point of a little discomfort or resistance.

Should you need to see a physio they will treat the muscle and joint tightness with a combination of massage and gentle mobilisations to regain the lost movement. Normally, there is a quick improvement within just a couple of days, and usually towards the end of your first physio appointment, but it is then important to ensure that there is not just a 100% recovery but also make sure it doesn’t happen again.

Since it is frequently onsets when waking up in the morning it is often assumed that it was due to “sleeping in a funny position.” Whilst this may have been the eventual reason the symptoms came on so severely, it’s usually the case that there is one or more underlying predisposing factors which may be related to posture and frequently stiffness in the upper back. These issues will therefore be addressed to ensure you have no recurrence of the problem in future and ensure as quick a recovery as possible.

Cervical disc injury/trapped nerve
What is it?

Intervertebral discs are like water cushions in between each of the bones in your spine. They are primarily involved in weight bearing, which in the case of the vertebrae in the neck mainly involves the head. Sometimes, if the disc bulges it can sometimes press on the nerve root supplying the arm. This can lead to pain not only at the neck, but also into one of your arms.

How does it present?

Where as a disc bulge in the lower back can often start after lifting a heavy weight with poor technique, cervical disc pain can often come on quite randomly such as when waking up in the morning. This does not, however, mean that you necessarily slept in a funny position that led to the onset of the pain, but may be the cumulative effect of one or more postural or movement issues over time – more on that later though.

The symptoms will often, unsurprisingly, involve neck pain but it is common with this sort of injury to get pain and/or tingling/numbness referred into and around the shoulder blade as well as into the arm and some of your fingers. It tends to be one-sided although it can involve both or at least alternate a little between the two.

Why does it happen?

It’s difficult to say exactly what causes a cervical disc bulge, although it is generally linked to postural issues over time. For example, they’re quite common between the 4th and 5th and also the 5th and 6th cervical vertebrae as levels these are heavily loaded with poor neck postures such as this ‘poking chin’ one.

Initially, as always, it is important to settle the symptoms. Manual traction can be very effective for this although it depends on the sensitivity as it can be a little too much at first. Other joint mobilisations options can also help, the aim being to relieve pressure on the disc and give it a chance to settle down.

As the symptoms improve you will probably find they centralise i.e. they move away from the arm and up towards you neck. From here you will want to, alongside continued hands on treatment, start strengthening. However, when talking about strengthening in this case we are referring to the postural muscles i.e. the tiny ones in between vertebrae that support the spine, as opposed to the larger, superficial ones that you can see just by looking at the surface of the skin.

Some exercises like this chin tuck one below are very effective, but in the long term Pilates can be very beneficial (and you’ll often notice an improvement after just 3-4 sessions).

How long does it take to go away?

This is the million dollar question – occasionally you can get a very quick resolution of symptoms within a matter of days or weeks, although it is still worthwhile addressing the reasons as to why it has come on in the first place in order to ensure no recurrence of the symptoms.

More commonly, however, you’ll improve quite quickly with treatment within a week or so but a true full resolution of symptoms can take quite some time.

Whiplash
What is it?

Whiplash is something most of us have heard of but what exactly is it? Sometimes referred to as WAD (whiplash associated disorder) there are several different types and grades of it. Most commonly associated with a car crash, it can happen in many other walks of life, such as this huge Courtney Lawes tackle on France’s Jules Plisson in the rugby 6 nations 2015.

One of the most common types that we see in clinic is from a rear shunt. Sitting in a car seat going slowly or at a standstill, the car behind doesn’t stop in time and hits the back of your car. Since your back and body is supported by the seat, they get pushed forward but as the neck is sitting freely on the top of your body it gets left behind, as demonstrated nicely in this video.

What are the symptoms?

Symptoms can be vary and include neck pain, headaches and shoulder pain as well as symptoms into the arm such as shooting pains, pins and needles and numbness.

Assuming there is no fracture, the first thing is to get it moving. Some gentle neck rotations are a good place to start, just going as far as your pain will let you.

Alongside this, massage, gentle mobilisations and acupuncture can be effective to help relieve symptoms. As the pain reduces, it is important to strengthen up the damaged muscles. This resisted shoulder hunches exercise with a band can be very effective in the early stages.