Tennis elbow
What is it?

Tennis elbow is pain around the bone on the outside of your elbow. Also called lateral epicondyalgia, it affects the common extensor tendon from which several muscles originate before running down the arm to the wrist and fingers. Repetitive overuse of these muscles over time, or just an increase in use (such as a long weekend of DIY!) can lead to a painful reaction in this area.

How does it present?

It is often sore to grip and the forearm can sometimes feel weak, even when doing relatively light activity such as lifting the kettle.

In addition to issues with the tendon, joint tightness may also be present between the three bones of the elbow as well as increased tension of the radial nerve so exact treatment will depend on the specific findings of the assessment. However, treatment tends to revolve around a specific strengthening programme with soft tissue release techniques and joint mobilisations also key; acupuncture can also be effective. This injury can often take a long time to clear up completely, but as with all injuries, the sooner you get it treated, the better.

Olecranon Bursitis
What is it? 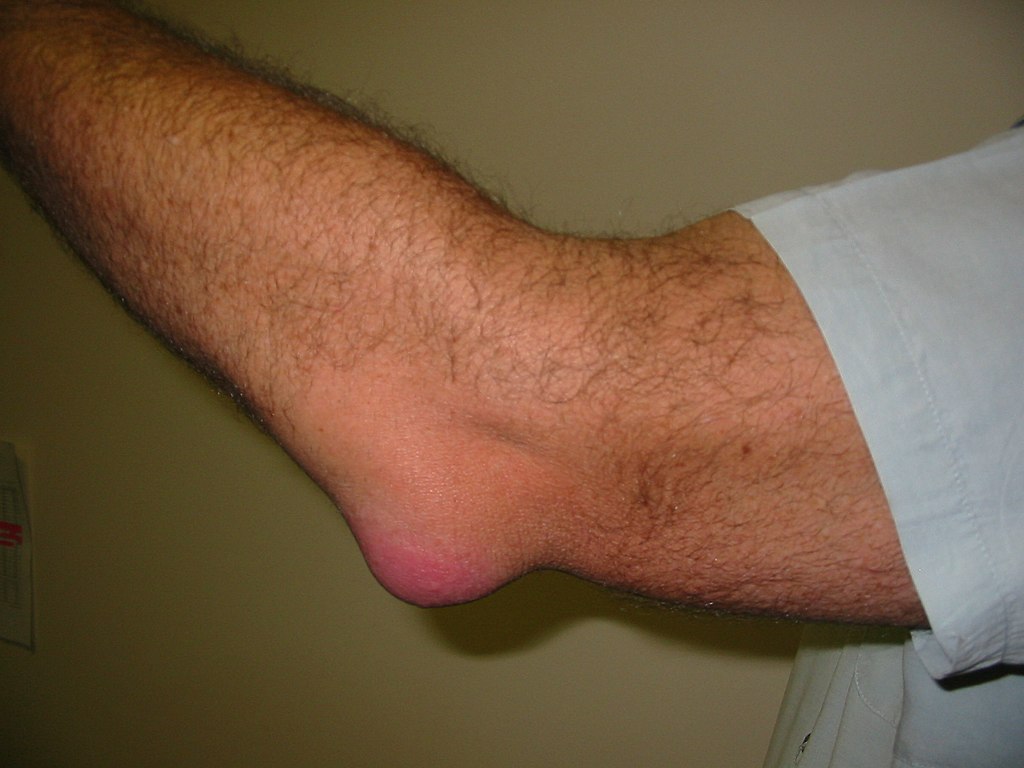 A bursa is like a small water balloon that sits between soft tissue, such as a tendon, and bone and prevents the tendon rubbing on the bone. There are many bursae all over your body and generally they do a fine job. However, sometimes they can become swollen and painful.

There are several reasons why are bursa can become inflamed:

(i) Direct trauma such as falling off a bike onto the elbow. It must be said though that if you fell off your bike onto your elbow and ended up with a bursitis instead of a fractured elbow then you’ve probably done quite well out of it

(ii) Minor but repeated injuries – this may include things like lots of little knocks to the bursa such as falling onto the elbow when doing martial arts. Even though this may not immediately flare up like falling off a bike might due to the softer landing, if it happened repeatedly then it may start to swell up and become painful as a result of the repeated and cumulative trauma over time

(iii) Repetitive movements – this may present in athletes such as javelin throwers or weight lifters that require a lot of repeated loading in a flexed position. Under this category you could also include prolonged sitting with weight through your elbows such as when working with your elbows on a desk for many hours – just think how it can be uncomfortable on your knees if you’re kneeling for a long time

(iv) Infection – this may result following a cut to the skin local to bursa. However, certain medical conditions can increase vulnerability to infection such as immunosuppressive conditions and even diabetes

(v) Arthritis – without going into too much detail here, arthritis may increase the chance of getting a secondary bursitis due to the general degenerative changes and local inflammatory environment associated with arthritis

Movement – initially, as with many injuries, it’s good to get it moving. Some simple bending and straightening of the elbow so that it doesn’t stiffen up and lead to secondary issues is a good idea. You may also be able to do some exercises that work your triceps, such as press ups. Doing it slowly it may help to improve the flexibility of the soft tissue over the bursa which can help to let it settle down. A good rule of thumb is “a bit of discomfort while you do the exercise is fine, as long as it doesn’t flare things up afterwards (and particularly the day after).”

Anti-inflammatories – taking some oral anti-inflammatories may help to settle things down and especially help to control the pain if it is particularly sore. Over-the-counter medications like nurofen and ibuprofen may be a good place to start. This should be accompanied by the movement advice above in order to actually return things to normal rather than just control the symptoms

If it is really persistent and the symptoms aren’t settling, a steroid injection may be required. This can be quite sore for a couple of days afterwards but should then settle quite quickly. In most cases though, treatment is successful with more conservative measures