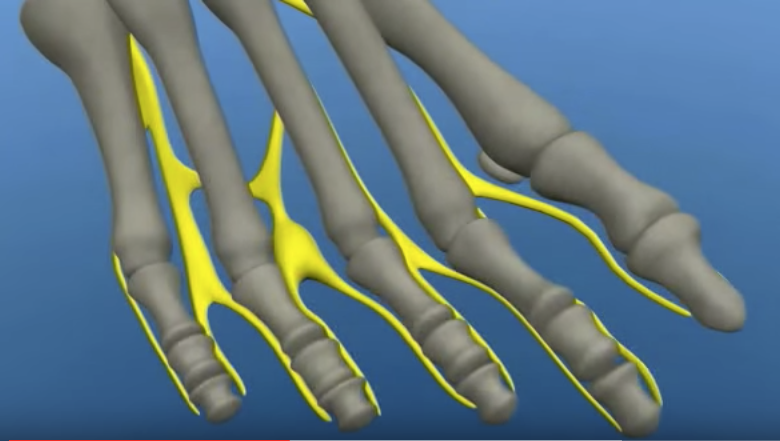 If you’ve ever suffered from pain or tingling between the base of the toes – then it could be something known as Morton’s Neuroma.

It commonly happens between the 3rd and 4th toe but it could equally happen between any of them. The cause is an inflamed and thickened nerve and it’s something that’s often seen in middle-aged women but also runners of all genders and ages.

One potential cause (and the reason it could affect women more than men) is the impact of wearing tight and/or high-heeled shoes. However the cause could be biomechanical and that’s what we’re going to focus on in this blog.

The cause of this is often down to excessive or uncontrolled pronation – something you might have come across in running shops where they talk about how your foot lands when you run.

Pronation is essentially the foot rolling in during walking or running, not  a problem or an issue in itself. The problem is down to how it’s controlled.

There are a few key stages involved in controlling this pronation

When the muscles are tired or simply not strong enough, instead of controlling this rolling movement it just collapses inwards as shown in this video. This can lead to any number of things including hip issues, knee pain, shin splints, bunions or Morton’s neuroma.

For Morton’s neuroma the the lack of muscle control means the bones in the foot, in particular the metatarsals, can get squeezed together which then pinches the nerves between them. Over time, this can lead to the thickened and painful nerves typical of the condition,

There does also seem to be an increased likelihood of getting a Morton’s neuroma if the foot is turned out excessively, particularly if you do a lot of walking/running as it can exacerbate the squeezing together of the metatarsals.

How is it assessed?

It’s a fairly straightforward problem to assess, with key signs including the symptoms mentioned above along with an area that’s tender to touch. Squeezing the metatarsal together with your hand will also reproduce the pain

How is Morton’s Neuroma treated?

It’s important to identify how the problem has occurred – so this involves looking at your running/walking technique (or gait) along with some functional tests such as a single leg squat.

Subject to these assessments, we can prescribe an exercise programme and, in the long-term, this will be the most important part of the treatment.

Commonly used exercises for this are these single leg heel raises on the edge of a step and this single leg squat whilst holding weights. These both help to strengthen the muscles in the area as well as further up the lower limb chain, particularly the single leg squats.


For quicker pain relief we usually recommend joint mobilisations along with a deep massage to the bottom of the foot. After this and with the exercises mentioned above, it’s possible to see a noticeable improvement in just a few weeks.

In some cases surgery is required, whereby part of the nerve is removed. This animation shows the basics of what happens in the surgery. Rehab following will again focus on the biomechanical reasons why the problem occurred in the first place.

The bad news is that it can take several months to get rid of the problem completely, whether treated conservatively or with the help of surgical intervention,  therefore any long walks or training plans should be assessed with your physiotherapist.

For any concerns or questions just get in touch with the team here and we’d be happy to help.