Cauda equina syndrome – what is it and how is it treated?

Cauda equina syndrome – what is it and how is it treated? 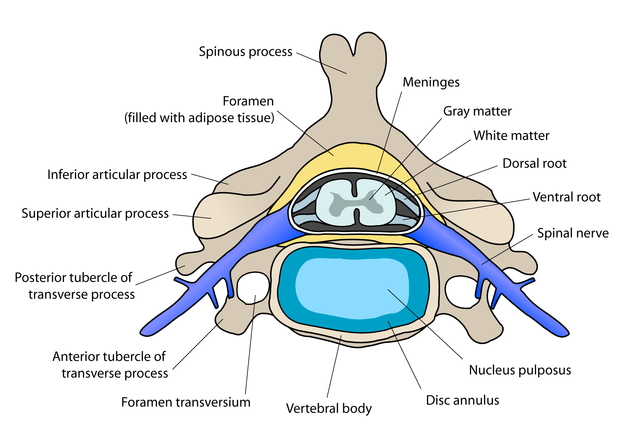 Let’s start with some anatomy, taking this side-on picture of the spine.

The spinal nerves run all the way down your back, protected by the surrounding bone and through most of it from a sheath.

Around the L2 level (the second of five lumbar vertebrae) the sheath is no longer there, leaving them hanging freely inside the spine and at higher risk of injury. The name comes from the Latin for ‘horse’s tail’ as some people think that’s what they look like.

This image shows one vertebra from above. 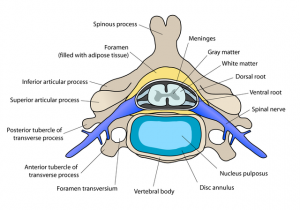 The spinal nerves are the areas labelled as grey and white matter – if something impinges on these nerves it can lead to the symptoms mentioned above. This could be a disc bulge, fracture or tumour.

Symptoms of Cauda equina syndrome include bladder and bowel problems, ‘saddle anesthesia’ (numbness in the area that would be in contact with a saddle on a bike or horse) or significant loss of power in one or both legs.

That said it can be very serious, particularly if left untreated.

Our advice would be to head straight for A&E if the symptoms are severe – or at least your GP if not. Worst case scenario can require surgery but equally the symptoms can settle on their own, once the cause has been identified.

Your physio can also advise on the best course of treatment once diagnosed.

Cauda equina syndrome is very rare but if you’re worried at all just give us a call or pop into our Richmond or Wimbledon clinics.