Bump on your shoulder? Could be an ACJ sprain

Bump on your shoulder? Could be an ACJ sprain 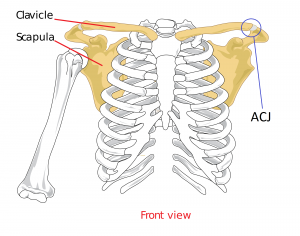 The picture above shows the acromioclavicular joint, the ACJ or the bit just up from the shoulder in layman’s terms.

It’s surrounded by ligaments and, like all ligaments, it’s possible to get varying degrees of tears to them.

However, unlike other joints where we have three different grades of tear, ACJ sprains are classified into six different types. This article features some nice diagrams that explain the differences.

How can you sprain the ACJ?

Depending on the severity of the sprain, it’s a fairly common injury from impact sports such as rugby, or cycling where crashes are a risk. We’ve even seen it happen as a result of hitting a tree while skiing! The common theme though is that it’s usually a ‘traumatic’ injury – i.e not something that happens gradually.

Anything up to a grade three sprain can be treated without surgery and diagnosis of those at the lower end can often be made in clinic without the need for a scan or X-Ray. A ‘step’ in the shoulder as seen here is a key sign – as the X-Ray confirms.

Sometimes an MRI scan will be required – but for the majority of people an X-ray will confirm the problem.

Treatment of an ACJ sprain

Generally these injuries do settle down over time but, while the underlying injury isn’t too serious, the discomfort can remain for several months.

Initial treatment would involve a period of rest and then it’s a good idea to work on strengthening the shoulder area – particularly the deltoid muscle which crosses over the ACJ.

The bad news is that there’s rarely a quick fix – a big part of treatment will be patience and there’s no set time for returning to sport as it varies so much by patient and the injury itself. Particularly for impact sports such as rugby, the layout will be longer compared to something like cycling.

For those who need to return to action quicker, an injection can help settle the symptoms and we can recommend several consultants who can help speed up the recovery.

Worried you might have an ACJ sprain? Just get in touch and we’ll be happy to take a look or refer you to a specialist.