An introduction to shoulder pain

An introduction to shoulder pain

Shoulder pain is one of the more common injuries that physios have to deal with and sometimes pain in the shoulder doesn’t even originate from the shoulder itself but can be referred from elsewhere.

The shoulder is also one of the most complicated joints in the body (if not the most), where pain can arise from multiple sources including muscles, tendons, bursae, nerves, joints or discs. Or to complicate things more – even the neck.

For this blog we’re going to look at the shoulder itself and one particular type of injury known as sub-acromial impingement. Common signs include pain when putting your hand behind your back or when reaching above your head, and it can be uncomfortable to lie on that side.

The shoulder is a ball and socket joint where the ball is the head of the upper arm bone (humerus) and the socket is on the outer part of the shoulder blade (scapula). To give us plenty of overhead movement it’s a fairly shallow socket, unlike the hip which is more stable but less mobile. As a shallow socket it therefore relies heavily on stability from soft tissue structures such as muscles and ligaments. 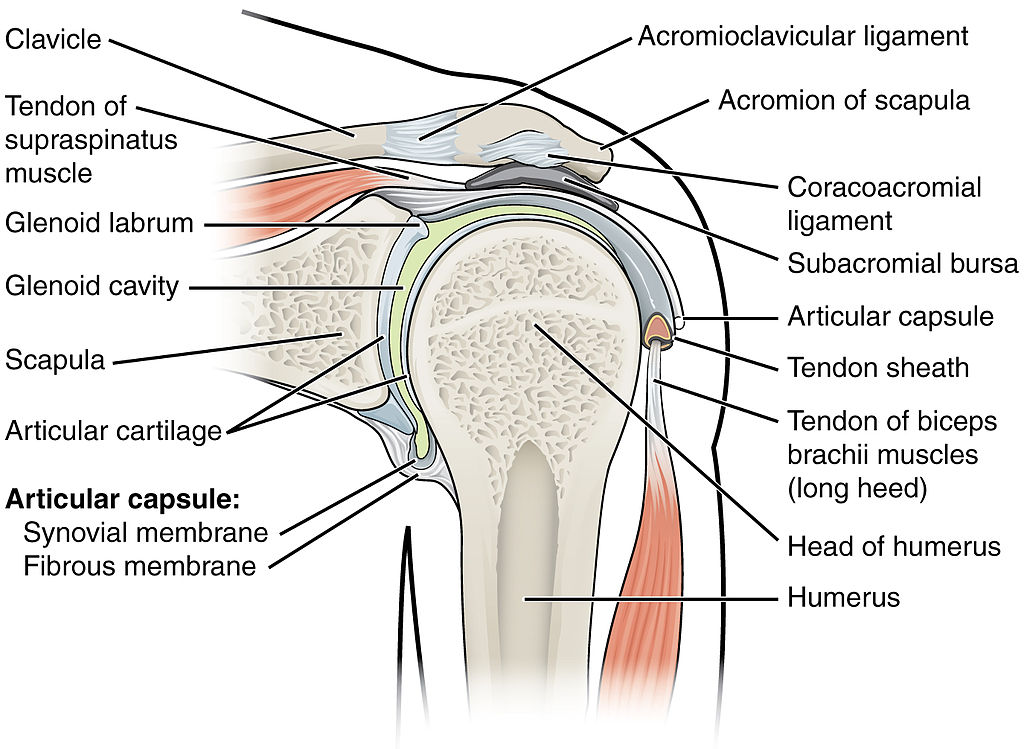 If these become damaged, weak or simply aren’t working as they’re supposed to, this can lead to the ball of the humerus moving where it shouldn’t, which can lead to impingement.

This diagram shows the shoulder joint – note the bursa (sack of fluid) under the acromion process of the scapula, namely the sub-acromial bursa. This can become inflamed if it gets pinched, leading to sharp pain in the area which can also refer about halfway down the arm. It also becomes inflamed and swollen making it easier to get pinched again. This is known as sub-acromial impingement.

Initial treatment should focus on offloading the bursa through various forms of manual treatment that can even be accompanied by anti-inflammatory medication or an injection, depending on the extent of the pain. By reducing the inflammation, the size of the bursa will decrease accompanied by a reduction in pain.

Treating the pain is all well and good, but our focus is always on treating the source as well as the symptoms. In this case it can come from muscle weaknesses, postural factors or issues with regular movements.

This is often done with a variety of exercises, initially quite isolated ones such as these:

Before culminating in more functional and complex movements such as this shoulder press:

Correcting movement is arguably more important with the shoulder than elsewhere and this is something your physio can advise on.

In future blogs we’ll take a look at some of the other common problems with the shoulder, such as rotator cuff tears, dislocation and something with a quite peculiar name: SLAP tears.